Check out this link for more information: https://www.maine.gov/energy/fuel-info.html

Biofuels are derived from renewable biomass including agricultural crops and residues, forest products and by-products and separated food waste. Biofuels that are used for heating oil have energy, economic and environmental benefits. Plant based fuels have lower carbon emissions compared to fossil fuels, they emit less pollution.

Biofuels are mostly made from plants that have just been harvested.

Biofuels can be any renewable biological material used as fuel. Things like wood, leaves, dried dung and wood all constitute biofuels.

Most common types of biofuels are ethanol (the same as found in beer and wine made by fermenting any biomass high in carbohydrates) this process is similar to brewing beer.
Biofuels reduce the use of fossil fuels that are associated with gas emissions.

Biofuels have been around since Henry Ford designed the Model T to run on ethanol.

Biofuel became more popular in 1970 due to less fossil fuels.
In 1987 Rudolf Diesel the inventor of the diesel engine had a diesel engine running on peanut oil.

Biodiesel is non-toxic and biodegradable. 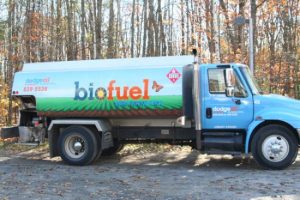